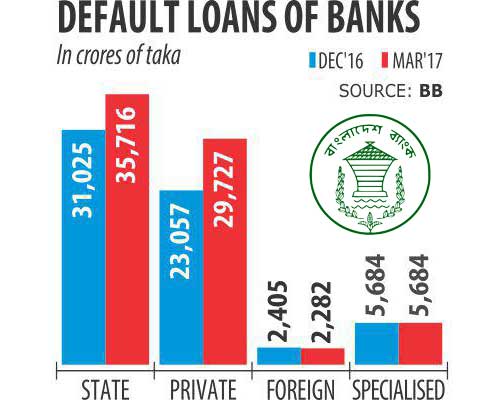 The nonperforming loans in the banking sector increased by Tk 11,237 crore in the first three months of 2017 — a development that has been attributed to seasonality by bankers, according to a report in the Daily Star.

“It is a common trend that default loans soars in the first quarter of a year due to slower recovery drives by banks,” said Nurul Amin, managing director of Meghna Bank.

The reason being, the bankers expend all their energy in enhancing the end-of-year figures that they take it easy when the new year rolls in.

Private commercial banks accounted for the spike in NPL: their default loans rose Tk 6,670 crore in the first three months of the year.

Many loans were de-classified by banks to show more profit at the year end, said a senior executive of the Bangladesh Bank.

“But the BB identified those loans and re-classified them during the annual inspection. As a result, default loan soared during the first quarter.”

Besides, the central bank took a strict stance in allowing loan rescheduling, which also accelerated the default loan growth, the BB official added.

The default loan of private banks stood at Tk 29,727 crore in the first quarter of the year, up 28.93 percent from the previous quarter.

The state banks’ default loans expanded Tk 4,691 crore to Tk 35,716 crore during the first quarter of the year.