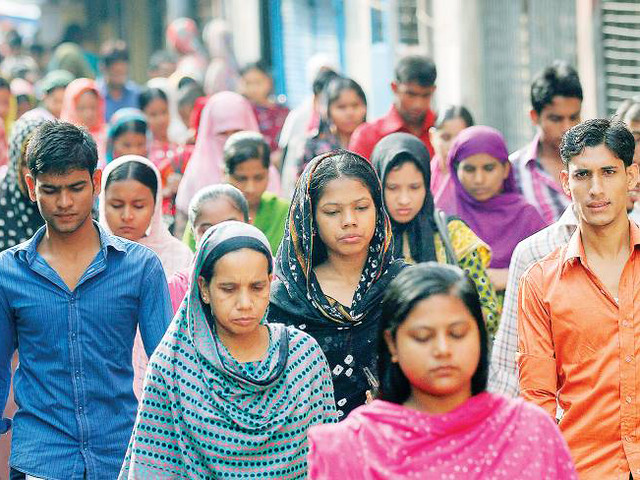 The Government of Bangladesh today approved, in principle, draft of a labour law for Export Processing Zones (EPZ) with the provision to allow workers to form welfare organisations to bargain for their rights.

The approval of the draft law was given at a regular meeting of cabinet held at Secretariat with Prime Minister in the chair. A special committee formed by the Prime Minister’s Office prepared the draft after discussing with the owners, workers and other stakeholders in EPZs, the Cabinet Secretary told reporters after the meeting.

He further clarified that the association approved in the new draft law was a “Welfare Association” and not a “Trade Union.” Currently, the EPZ Workers’ Association and Industrial Relations Act 2009 does not allow trade unions, a term not mentioned also in the draft endorsed by the cabinet.

As per the proposed law, at least 30 percent workers of a factory within an export processing zone will have to apply for registration with the Bangladesh Export Processing Zone Authority (BEPZA) to form an association. After registration the association’s executive committee will be elected for one year. One candidate or a panel will need at least 50 percent votes to be declared a winner and there will be a fresh election in case of fewer votes.

The associations or societies do not have collective bargaining rights but could negotiate with the employer on working conditions, remuneration or payment for productivity enhancements and worker education programmes.

Special legislation on unionisation has prohibited the formation of unions in the country’s eight Export Processing Zones (EPZs) which are exempt from the application of the Labour Act and the Factories Act, thereby excluding workers in the zones from the coverage of laws governing trade union rights, wages, hours and safety and health standards. Instead, the government enacted the EPZ Workers’ Association and Industrial Relations Act in 2004 (amended in 2009) that allows only for limited freedom of association in the EPZs. The law initially envisaged the establishment of ‘Workers Associations’ in the EPZs. A 2010 amendment renamed the ‘Workers Associations’ as ‘Workers’ Welfare Societies’ but essentially did not change anything.

Ensuring the Right to Organise and Collective Bargaining through formation of trade union in the (military run) Export Processing Zones (EPZ) is one of the major requirements of the U.S.A. for the reinstatement of Generalised System of Preferences (GSP) trade benefits  which was suspended in June 2013. The EPZs are governed by a separate agency, the Bangladesh Export Processing Zones Authority, and by separate laws. By tradition, the authority has been run by a military officer, active duty or retired, and many factories have hired retired soldiers to oversee security.

A recent interagency review of the GSP Action Plan for Bangladesh led by the Office of the U.S. Trade Representative (USTR) found that more needs to be done to improve worker rights and worker safety in Bangladesh. The review also found that the Government of Bangladesh has not yet implemented substantial parts of the Action Plan. The government is behind schedule in carrying out many hundreds of critical safety inspections in garment factories, as well as meeting its commitments to hire additional inspectors. The government has also been slow to respond to continuing reports of harassment and violence against labor activists. The review concluded that the government needs to develop a credible and effective mechanism for responding to and addressing allegations of unfair labour practices. Since the suspension of GSP, the government has also not advanced the labour law reforms called for in the Action Plan, including changes to ensure that workers are afforded the same rights and protections in Export Processing Zones (EPZ) as in the rest of the country, the USTR said.

The EU Trade Commissioner Karel De Gucht repeatedly warned about improvements in labour rights, most notably in the Export Processing Zones of Bangladesh. “Of course, the reality is that there’s still much more to do. Most urgently, implementing regulations on labour reform must be enacted soon. Improvements in labour rights must be extended to the Export Processing Zones,” De Gucht said while addressing an informal ministerial meeting of the Organisation for Economic Cooperation and Development (OECD) in Paris on 26th June 2014. The Commissioner further said all the enabling conditions must be in place, not only in law but in practice, for workers to organise into trade unions and make their voice heard at the factory level.

“Over the coming weeks, the European Commission will be working on a full assessment of where we stand today. Once that is done we hope to call a meeting this autumn of all parties to the Compact as well as other stakeholders to get their perspective and set the agenda going forward,” Gutcht said. He said the European Union had an obligation to act because it grants duty-free and quota-free tariff preferences to Bangladesh which have been a boon to the country’s export performance.

From the Bangladesh perspective the “in principle” approval of the “draft” Bangladesh EPZ Labour Act 2014 allowing “Welfare Association” and not a “Trade Union.” may seem to be a step in the right direction defusing tension between Bangladesh and the major trading partners, the EU and USA. However, the full content and detail explanations of the “yet to be in force” law may not offer enough substances to fully convince the largest client of Bangladesh’s garment business, the EU, which imported over 9 billion euros worth in 2013 and other stakeholders.

Bangladesh’s failure to live up-to it’s specific and time-bound commitment to improve levels of occupational safety and health and promote responsible business conduct and greater respect of labour rights, with a particular focus on freedom of association and the right to collective bargaining may leave the EU no option but to take “appropriate action”, such as limitation, temporary suspension or cancellation of the GSP in order to remain credible, most importantly to their citizens across Europe.