Inspection of 81 garment factories conducted by the 23 special inspection teams of the Department of Inspection of Factories and Establishments of the government of Bangladesh found labour rights and safety standards below the required level.

Some important compliance issues, such as formation of trade union, insurance facility for the garment workers, daycare centre, maternal welfare, participation committee, safety record book and safety committee etc. have not been addressed satisfactorily, according to the department. 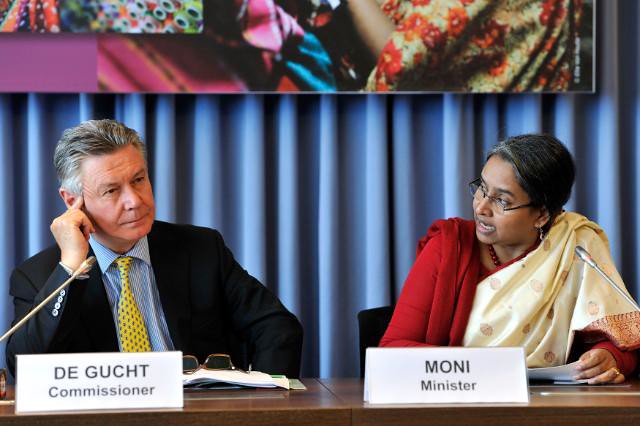 Bangladesh failed to deliver on most of the commitments, according to the working paper for the Meeting on GSP, Presided over by the Commerce Minister.

The European Union is not satisfied with the progresses Bangladesh has made to improve workplace safety in the apparel industry, according to the EU Ambassador (Head of Delegation of the European Union) to Bangladesh. He was speaking on progress in RMG sector in Dhaka on the March 09, 2014. “A few changes are happening. But lots of things need to be done,” he told reporters after a programme “Lives beyond machines — a reflection on priorities for women in the RMG sector” organised by CARE Bangladesh at Cirdap auditorium in the city.

As a least developed country (LDC), Bangladesh benefits from the most favourable regime available under the EU’s Generalised Scheme of Preferences (GSP), namely the Everything But Arms (EBA) arrangement. The EBA grants the 48 LDCs — including Bangladesh — duty and quota-free access to the EU for exports of all products, except arms and ammunition.

However, in order to continue to benefit from this scheme, certain legal conditions have to be met: human and core labour rights must be respected. It is important, therefore, that Bangladesh shows sustained progress in improving its labour rights and working conditions in line with core ILO conventions.