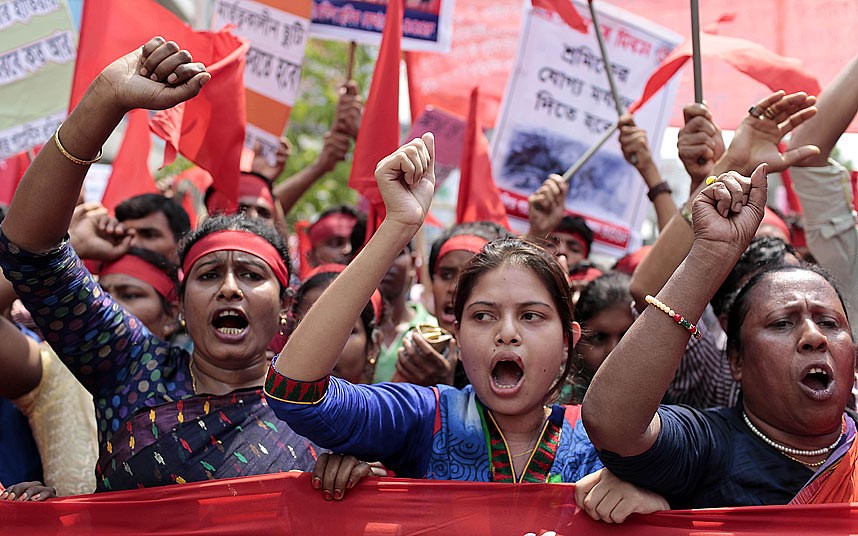 The European Union (EU) Monday pressed for urgent formulation of necessary rules for implementation of the labour law, especially to safeguard labour rights and standards.

The call came from a meeting on ‘Bangladesh Sustainability Compact’, held in Brussels, one year after signing the agreement to review the progress made in the country’s ready-made garment (RMG) industry.

Bangladesh signed the deal with the EU in July 2013 after the Rana Plaza collapse. Later the US joined the initiative. Bangladesh pledged to improve labour rights and health and safety conditions for workers as well as to encourage responsible behaviour by businesses in the RMG industry within a specific period.

“There has been much progress since then: labour law has been amended to strengthen freedom of association, collective bargaining and occupational health and safety; new trade unions have been created; more labour, and fire and building safety inspections have been carried out,” a statement issued by the EU said, quoting its Commissioner László Andor.

“These are encouraging steps, but we need to advance further. Measures need to be taken urgently to ensure effective enforcement of the Bangladesh Labour Law. Issues requiring particular attention include: better guarantees for freedom of association, protection of workers and trade unions from intimidation or discrimination, and ensuring that all workers have the same rights, including those working in the Export Processing Zones,” he added.

He further called for recruiting additional inspectors, and continuation of the garment factory inspections.

“And we need to ensure that victims of the collapse receive all the support necessary for their rehabilitation.”

“We need to continue monitoring the implementation and results of the Compact,” he said, adding that a future review will be held next year.

“I am convinced that, working together, we can achieve further progress by then.”

Meanwhile, a delegation, headed by Commerce Minister Tofail Ahmed, is in Brussels to highlight the developments made in the country’s RMG industry under the Compact.

When contacted, a senior labour ministry official said, they need more discussion, as many stakeholders are involved in formulating the rules on labour law.

“It might take two more months to finalize the draft of the rules,” he added.

In line with the Compact, the government on July 15, 2013 amended the labour law, simplifying the procedure of trade union formulation. Subsequently, some 236 trade unions have been registered with the labour ministry.