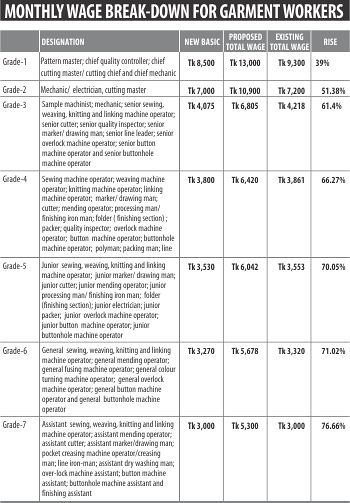 The Bangladesh’s 1,200 sub-contracting readymade garment (RMG) factories are yet to implement the new wages even after publication of the official gazette with effective date of 1st December 2013.

Although most global brands officially do not allow production in unauthorised sub-contracting factories it is proved beyond reasonable doubt that they were fully aware of these facts. The  global brands have taken very little or no effective actions to prevent such illegal practices, as they call it.

The Department of Inspection for Factories and Establishment (DIFE), the concerned government authority of Bangladesh, said nearly 99 per cent of the sub-contracting factories did not implement the new wages effective since 1st December 2013.     ”Almost all of sub-contracting RMG factories are yet to implement the new wage structure for workers,” DIFE Inspector General (IG) Syed Ahmad told the daily Financial Express of Bangladesh. There are more than 1,200 garment factories do sub-contract jobs employing nearly 0.7 million workers, according to the Bangladesh Garment Manufacturers and Exporters Association (BGMEA).

RMG sector worker leaders claimed that not only sub-contracting factories but also a large number of big factories have failed to implement the new wages whereas the owners have already been rewarded by lucrative tax and financial benefits by the government in the name of extra costs for implementation of the new wages and political violence in the last quarter of 2013. They further said “the poor goes empty hands again”.

Sammilito Garment Sramik Federation president Mrs. Nazma Akter told the daily Financial Express of Bangladesh that in the name of implementation of the new wages the RMG factory owners had been taking many of advantages from the government but they were still ignoring payment according to the new wages as per law of the country.   She further said that this condition was making the workers angry as they were feeling deprived of their fair wages.