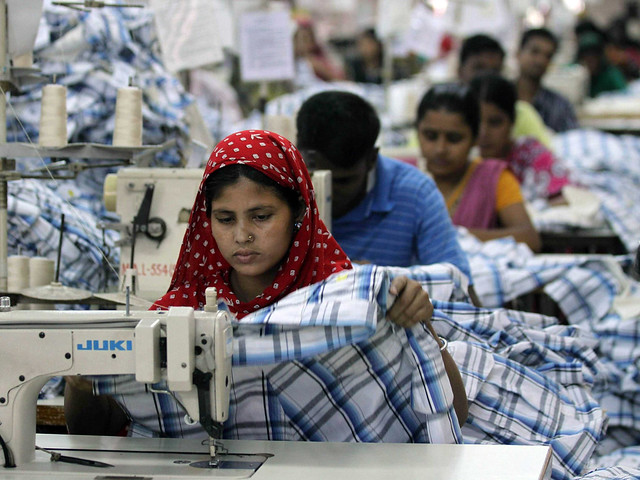 A snap-shot survey conducted by the Bangladesh Garment Manufacturers and Exporters Association (BGMEA) found that nearly 40 percent of the garment factories in Dhaka and its adjacent areas did not pay the new wage scale effective from 1st December 2013, according to the Daily Star newspaper.

The survey conducted between January 10-22 covered 596 factories in Dhaka and its adjacent areas and 350 in Chittagong where only 5 percent of the factories have implemented the new wage scale for garment workers. By 2013, there were approximately 5,000 garment factories, employing about 4 million people, mostly women, part of Bangladesh’s $19 billion-a-year industry, export-oriented ready-made garment (RMG) industry.

According to various labour organisations, only 25-30 percent factories paid as per the new wage scale. Most of the owners assured new wage scale but did not keep their words when wages were paid for the month of January, said the labour leaders further.

“It will take another two to three months for full implementation of the new wage scale as the garment sector is passing through testing times,” said Mr. Shahidullah Azim, vice-president of the BGMEA. The reason for the very low implementation rate of the new wage scale in the port city of Chittagong, Mr. Azim says, is that most of the factories there are vulnerable ones. “The factories in Chittagong are not as capable (wealthy / solvent) as the ones in Dhaka.”

The labour leaders complain that repeated attempts to solve the wage payment issues through discussions with the owners failed, resulting, in some cases, loss of employment of supporters and vocal workers whereas freedom of association and the right to collective bargaining was their fundamental rights.

In November last year, the government finalised a minimum wage of BDT 5,300 for garment workers, effective since December 1 according to the gazette published on the December 5, 2013 by the government of Bangladesh.

According to the labour leaders and international experts neither the government nor the BGMEA has taken any effective measures, let alone penalising the violators of the laws through non-payment of the new wage scale to the millions of garment workers in Bangladesh.

On the contrary, the Textile and Clothing (T&C) industries lobby groups have successfully negotiated lucrative tax and financial benefits from the government arguing extra costs for implementation of the new wage scale and political violence in the last quarter of 2013. 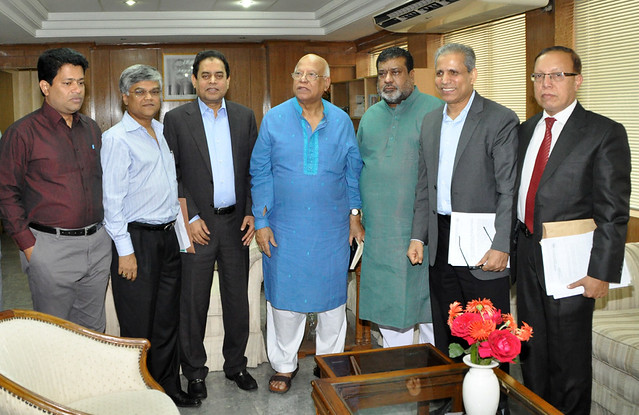 More demands have been placed to the government including bank loans equivalent to four months’ wages of workers, starting from November last which would be repaid over a period of two years. They also wanted the banks to put their term loans/project loans/import-related loans in interest-free block accounts for next two years. The Textile and Clothing (T&C) industries lobby groups are negotiating reduced Tax Deducted at Source (TDS) to 0.20 per cent from the existing 0.85 per cent for the apparel and textile sector as well as 0.25 per cent cash incentive against each FoB export. Exports to the new and non-traditional markets will be rewarded by 3% cash incentive increased from 2% earlier. The exporters will enjoy the benefits retroactively effective from 1st January 2014 until end of the fiscal year (June) 2015. 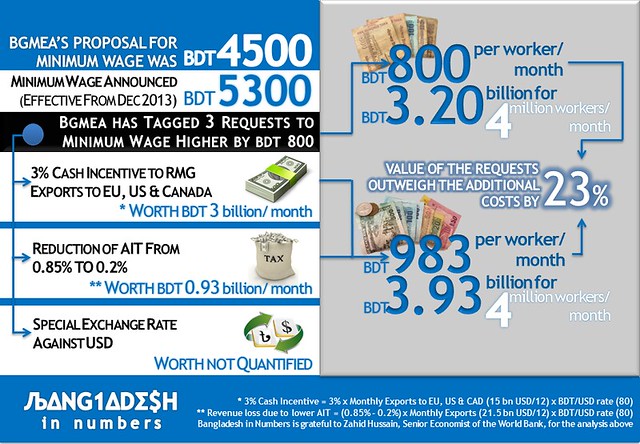 These demands are expected to be met by the government soon weakening the economy, particularly the banking and financial sector further by writing off huge amount of bad debts (loans taken by the businessmen but never paid back).

Banks in Bangladesh wrote off loan amounting EUR 6.9 billion and EUR 3.0 billion respectively in 2013 and 2012, according to central bank statistics. The four state-owned commercial banks alone accounted for EUR 4.6 billion of the write-offs, up 288 percent year-on-year. Sonali bank wrote off EUR 2.2 billion, Agrani bank EUR 1.3 billion and Janata bank EUR 1.0 billion. Rupali Bank did not write-off any loan in 2013. Private banks, most of which are controlled by politically well-connected businessmen, wrote off EUR 2.3 in 2013.

State-owned commercial banks are highly politicised and controlled by the government. The simple math is that the losses are socialised (on state account) and profits are privatised in  the pockets of a handful textile kings of Bangladesh. The garment workers continue to go to bed hungry in spite of record garment export of EUR 15 billion in fiscal 2012-13 (June 30, 2013), according to the statistics of the Export Promotion Bureau of Bangladesh. 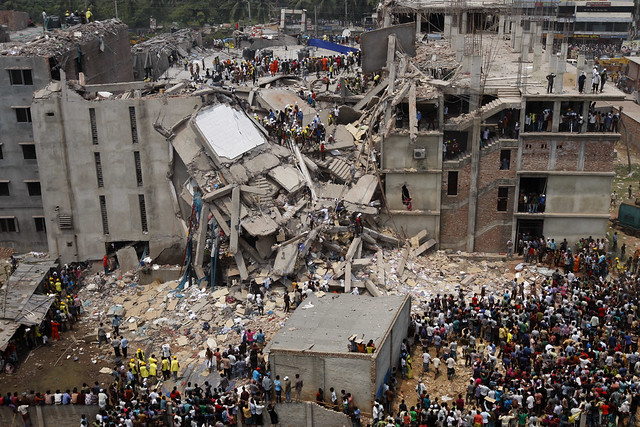 As Bangladesh’s largest trade partner, the European Union expressed it’s grave concerns about the labour conditions, including health and safety provisions. The European Union called upon the Bangladeshi authorities to act immediately to ensure that factories across the country comply with international labour standards including International Labour Organisation (ILO) conventions.

The Joint Statement by the High Representative of the Union for Foreign Affairs and Security Policy Catherine Ashton and EU Trade Commissioner Karel De Gucht further states in the joint statement, “the EU is presently considering appropriate action, including through the Generalised System of Preferences (GSP) – through which Bangladesh currently receives duty-free and quota-free access to the EU market under the ‘Everything But Arms’ scheme – in order to incentivise responsible management of supply chains involving developing countries.”

Similar repeated serious warnings are expected to have consequences, such as limitation of the GSP up-to cancellation given the gross violations of existing laws such non-payment of minimum wage, very slow and unsatisfactory progress of the legally binding and time bound agreements / commitments between Bangladesh and international organisations and trade partners etc.

Until and unless the concerned authorities of Bangladesh enforce the already existing laws, rules and regulations sincerely very little will be changed for better. And decisive measures (limitation or temporary suspension of the GSP) by the EU have the real potential to change things for the millions of garment workers in Bangladesh.