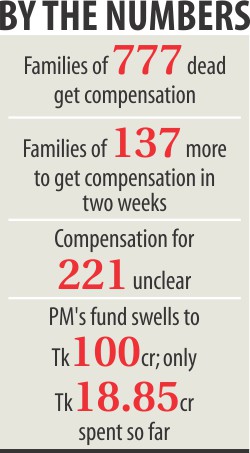 Many Rana Plaza victims are yet to receive the promised compensation from the government and retailers, nine months after the Bangladesh’s worst industrial disaster on 24th April 2013.

To date, families of 777 of the 1,135 dead workers have received from EUR 1,000 to 5,000 thousands Euro each from the Prime Minister’s Fund, while the compensation was “very insignificant” for most of the 1,800 injured workers, according to an analysis of the Centre for Policy Dialogue (CPD).

“A number of victims who were interviewed have not yet received any of their financial dues,” said Khondaker Golam Moazzem who led the team of researchers for the project.

In August last year, the CPD in partnership with 14 rights organisations, professional bodies and media outlets launched a civil society initiative to monitor the progress of the commitments made by the local and international organisations.

The government pledged long-term support of EUR 10,000 – 15,000 for the seriously injured, but only 40 have received the payment so far.

On re-employment and training of workers and their able-bodied family members, Moazzem said there had been slow progress in the initiatives jointly undertaken by the government and local and international organisations.

About the government’s pledge to ensure re-employment of 100 workers in the leather industry, he said only 32 of them were to take training for the job.

Of the 100 jobs promised by the Bangladesh Garment Manufacturers and Exporters Association (BGMEA), 70 Rana Plaza victims have been recruited at member factories in Savar.

Two initiatives at local and global levels to provide compensation are halfway, as both are facing complexities over participation by retailers and suppliers, legal issues, methods for estimating the compensation, collection of funds and its disbursement.

“Since the workers and their families are in distress, the discussion on compensation should be completed immediately,” Moazzem said.

At the dialogue, MM Akash, a professor of economics at Dhaka University and also a member of the committee responsible for setting compensation packages for the victims, said the 31-member committee has fixed EUR 14.51 thousands as compensation for the dead workers’ families or those permanently disabled.

He, however, said the committee, which was formed following a High Court order, could not come up with a package for the rescuers who have been injured. “But if they have suffered the same level of injury as the workers, they will fall in the same category.”

Hamida Hossain, chairman of Ain o Salish Kendra, a women and children rights group, criticised the compensation-fixing committee for slashing the amount by 25 percent to EUR 15,000 from an initial amount of EUR 20,000.

She said the direct dependants of the victims should get the compensation as the existing Inheritance Law might see the assistance end up in the hands of the victims’ parents.

Mohammad Hatem, acting president of the Bangladesh Knitwear Manufacturers and Exporters Association, said the EUR 15,000 as compensation should be a “one-off incident” and not be made the norm for compensation in case of future disasters.

Shaheen Anam, executive director of Manusher Jonno Foundation, called for ensuring transparency in handing out compensation. She said there should be proactive disclosure under the Right to Information Act about the Prime Minister’s Fund.

Mariam Begum, who has lost her right hand, said she had received EUR 12,000 from the government. “But I cannot use the artificial hand as it is too heavy. As a result, I can’t do any work.”