The highest ranking official of the foreign investment promotion and supervision authority of Bangladesh, the Bangladesh Investment Development Authority (BIDA), does not believe that Bangladesh would achieve it’s goal improving it’s rank among the 100 best countries in the World Bank’s Ease of doing business Index this year. 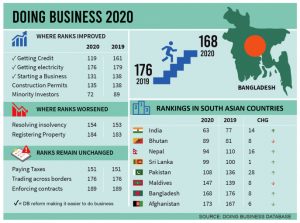 One of the most senior bureaucrats of the country, Mr. Md. Sirazul Islam, a former secretary of the government of Bangladesh and currently holding a federal minister rank position of the Executive Chairman of the BIDA, expressed his doubts about achieving it’s goal, at a Webinar on Monday, 17th May 2021, reports the Daily Prothom Alo.

Mr. Islam said that a target was set to improve Bangladesh’s rank to 99 by 2021 from 168 in the latest ranking among 190 countries rated; Somalia being the worst at 190th place and New Zealand being the best at first place.

Mr. Islam also admitted that many officials of government organisations were unethically demanding money from businessmen. He said, by giving an example, ‘A few days ago, a foreign investor complained to me that he had been unjustly harassed by asking money illegally. Additional tax burden was imposed on his business on expenses which were not taxable by law, for not paying the officer unethical money. That foreign investor has asked the BIDA for a solution. There are issues with such unethical transactions, which are obstacles to making business easier. ‘

The BIDA Chairman further accepts allegations of such unethical transactions raised by businessmen at the Webinar, which was attended by various professional groups including businessmen and former bureaucrats.

Mr. Mohammad Abdul Mazid, former Chairman of the National Board of Revenue (NBR), said BDT 72,000 or EUR720 is demanded at local administration level to register a land without any legal justification. Registration of a company cannot be completed directly by the application without a middleman or consultant nominated by them.

Mr. Humayun Kabir, President of the Bangladesh Enterprise Institute (BEI), a private research institute, and a former ambassador, said, “you will be in trouble if you ask why the application or file is not moving forward you will be receiving the reply (from the authority) that your file can’t be found.”

Mr. Humayun Rashid, President of the International Business Forum of Bangladesh (IBFB) said that there were sectors in Bangladesh, which require 28 different licenses to start a business. If processing of the application for each license lying with the licensing authority for a month then it will take 28 months just to complete the paper work before starting business. Who will come to (Bangladesh) to do business in such a situation?